Here is brief overview of a few of the key issues and problems I’ve encountered over the last 35 years in talking about education: END_OF_DOCUMENT_TOKEN_TO_BE_REPLACED

Once, an explorer came across an island tribe, whose religion centered around the Sun. Every morning, the shaman and his acolytes arose before dawn, knelt facing east, and said prayers and performed ritual actions until sunrise. The explorer asked: what is the meaning of this ritual? The shaman replied: We must pray to the Sun God to awaken him, so that he may rise and the day begin.

The explorer explained that, back where he came from, nobody prayed for the sunrise, and it happened anyway. He suggested that maybe, one day, the shaman try sleeping in, and see if the sun didn’t come up anyway.

The shaman was aghast. “You are suggesting that I fail to appease the Sun God, and risk visiting ruin upon my people! Since the creation of the world, our shamans have prayed the morning prayers. Each of us trained for years as an acolyte before we are entrusted with the sacred duties, and each of us in turn trains acolytes, who will some day carry on in their turn. The people make offerings for our sustenance and hold us in esteem for the important service we do. You are insane!”

The explorer replied: “Yet I have been all over the world, and seen many peoples, and witnessed many rituals. Few peoples pray as you do – yet the sun comes up on all of them anyway. We also believe that your people only got here a few centuries ago, and so your rituals are not from the time of creation. In short, we believe you are mistaken, that your rituals have no effect on the sun, and, that if you stopped, the sun would still rise here as it does everywhere else.

But the shaman would not believe him, and the people, when they heard about what the explorer had said, were likewise convinced that he spoke madness.

The chief of the tribe, the wisest man on the island, met with his councilors to discuss what was to be done. The explorer was brought before them, and explained what he had said, and was dismissed. Many spoke, and the chief listened, until, finally, he spoke. “It may well be that the explorer speaks the truth. But we shall never say this to the people, and, should anyone say they believe the explorer, we shall ridicule them and shame them into silence. What is at stake here is not the shaman’s ritual alone. Each of us here, the leaders of our tribe, are held in esteem by the people because we honor and in turn are honored by the shaman. If the shaman were disgraced, how long before we ourselves lose the honor of the people? How long after the shaman stops receiving offerings before we are no longer sustained by the people we rule?”

The council was silent. The chief spoke again: “This is what we shall do. The explorer and his people will be made to leave the island, and a great feast celebrating the Sun God and honoring the shaman will be proclaimed. People will soon forget about this explorer and his ideas, and all will be well.”

And so, the explorer was expelled from the island, the feast was held, and the people returned to their lives. The shaman and his acolytes said the morning prayers, and the sun continued to rise. END_OF_DOCUMENT_TOKEN_TO_BE_REPLACED

Oh, boy. Every so often, the media will wander over to Sudbury Valley School, and produce something like this, which flushes out people, even Catholics,  who write stuff like this.

The fundamental error in reasoning here is that a caricature of the Sudbury Model is held up for comparison to an idealized never existed in reality traditional classroom school. For over 40 years, critics have labeled Sudbury a ‘Lord of the Flies’ school, which is not only ignorant, but ironic – Lord of the Flies is about what happens when kids from a really “good” school – an elite English boarding school – are allowed, for once, to control their own behavior. Having only the examples of their teachers to follow – dominate, humiliate, control – they don’t do a good job.

In other words, people are attempting to mock Sudbury by reference to a work that is a satire on traditional English education and culture – rigid class structures, violence lurking just below the surface, the strong preying on the weak.  On the contrary, Sudbury in practice is the opposite of the English boarding school experience, and aims precisely to educate kids on how to behave when the choice is their own.  END_OF_DOCUMENT_TOKEN_TO_BE_REPLACED

You might also want to check out Christian Iconography: the Basics.

Over on Fr. Z’s wonderful blog, the good father discusses a very interesting aspect of western Medieval and early Renaissance Madonna and Child representations – that the Child Jesus has a habit of grabbing His Mother’s veil or, less commonly, cloak: 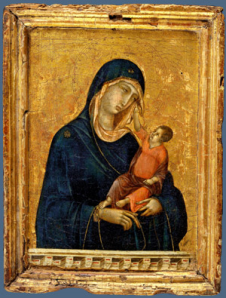 This gesture of the Christ Child is by no means universal – eastern icons, for example, often have the Child in a rather more formal pose, often issuing a blessing – but it is a strong theme especially in Italy.

END_OF_DOCUMENT_TOKEN_TO_BE_REPLACED

Failure to follow a Parental Directive resulted in our 6.5 year old being subjected to tickles by Momma.

“Stop tickling me so I can put on my socks!”

“Put on your socks so I can stop tickling you.”

“This – could get complicated!”

Today, the priest gave a very good homily, about how the Cross is present even in the story of the Nativity.

However, another possible theme for a homily occurred to me, along with the thought that it’s a good thing I’m not a priest or deacon. Call this a fever dream homily: END_OF_DOCUMENT_TOKEN_TO_BE_REPLACED

O great mystery,
and wonderful sacrament,
that animals should see the new-born Lord,
lying in a manger!
Blessed is the Virgin whose womb
was worthy to bear
Christ the Lord.
Alleluia!
END_OF_DOCUMENT_TOKEN_TO_BE_REPLACED

That was fun. I need sleep.

By Day 9, we’d begun to learn some of the Tagalog songs. Hope the Filipinos near us can forgive our no doubt atrocious pronunciation. But enthusiasm seems to count for a lot in Filipino liturgy, and we were all over that angle.

In sum: doing a novena of Masses with a crowd of good-natured people full of Christmas cheer at 5:30 in the morning is a good, grace-filled and happy thing to do. Some of our kids made it at least a couple times. We’ll be back next year. END_OF_DOCUMENT_TOKEN_TO_BE_REPLACED

Wife and I made the 5:30 a.m. Simbang Gabi Mass today – 2 days down, 7 to go.  The Pastor from Parish A did the honors – he looked like maybe he’s not a morning person.

Skipped the breakfast delicacies today, but fully plan to partake tomorrow. Maybe I’ll develop a taste for chicken and rice soup with chunks of real chicken bones and gristle, ham cooked until stiff in sugar, fried Spam, and semi-sweet black baked goody of indeterminate hyle.  It could happen. I will do my duty.

Big Question: is this all bringing me closer to God, and more prepared for Christmas? Yes. God makes the most out of even our most trivial sacrifices – such as giving up an hour of sleep, and being around others who are also celebrating Christ’s upcoming birth with such obvious gusto is good for the soul.

Yard Sale of the Mind
Create a free website or blog at WordPress.com.