These are topics I’ve tried to hit on here, and a bit here, and elsewhere – but I’m playing grade-school pick up basketball – Fesser’s the NBA.

At Parish C this week.

Here in this place, new light is streaming
Now is the darkness vanished away
See in this space our fears and our dreamings
Brought here to you in the light of this day

Who among us, trying to collect our thoughts and prepare our souls for the reception of the Blessed Sacrament, has not had their fervent meditations on the True Presence interrupted by a Wilhelm  followed by the meaty *thwap!* of yet another just recently deceased member of the congregation, who, having picked up a fatal Ebola infection from the bacteria-encrusted hands of some other Mass-goer, one whose hand-sanitizing habits fell lamentably short of brain-surgeon-level, has dropped dead right there in the aisle?

What to do, what to do? A full-on scrub station, overseen by Nurse Ratched, while certainly called for, might seem, I dunno, less than fully Christian. How about, right by the doors: 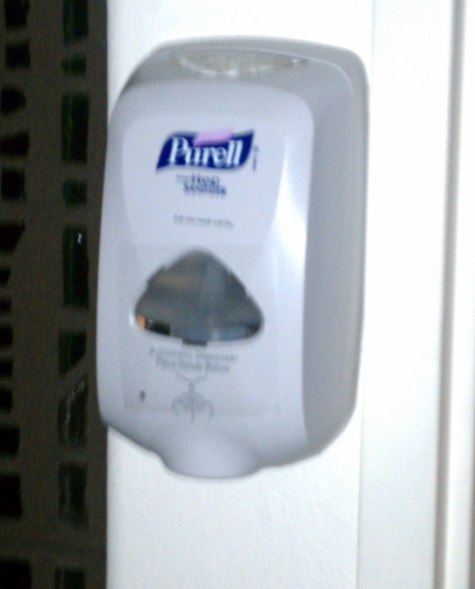 There you go! Non-existent problem solved!

Now, how about some mental floss for the panicked-obsessive fear mongers who think imposing this kind of randomly chosen locus for their free-floating anxieties on innocent church goers is a good idea.

I wish I were kidding.

Now it appears that the Webb space telescope, planned replacement for the Hubble and the single most exciting space project since, I dunno, Mercury, is in trouble, what with the late economic unpleasantness.

As is inevitable when cutting edge make-it-up-as-we-go science meets massive federal bureaucracy, the project is factors over budget and years behind schedule. I’m sure you’re shocked to hear this.

But let’s look at the numbers:

Webb was originally budgeted at about $1.6B, and scheduled for launch around now. Now, it appears 2020 is the earliest realistic launch date, with costs up around  $6.8B. Classic case of a run-away government project, and an easy target for this year’s ‘let’s-pretend-we’re-cutting-the-budget’ crowd of Congress-droids.

– ‘freakin’ AWESOME’ – to use a scientific term – hardly describes the Webb. It is the coolest science project EVAH. I, and millions of other geeks hyperventilate just thinking about it. We’d all trade a pile of superconducting super colliders for one Webb.

– Here’s the point pertinent to the current topic of manned space flight – even at $6.8B, you could buy over 73 Webbs for the laughably low-balled price of $500B, which is what wild-eyed optimists, after several bong hits, claim it would cost us to get people to Mars.

And – here’s the real point – we’ll discover more stuff, test more theories, blow more minds, and get a better opportunity to get closer to our Creator – in short, do more science – in a month of Webb operation than we’ll do in a Mars trip.

Over on the inestimable Fr. Z blog, the topic of funding NASA for manned space exploration came up. I opined:

We’ve learned more, by far, from unmanned exploration, particularly the Hubble and the planetary probes, than we’ve ever learned from manned space exploration, on both a total and bang-for-the-buck basis. If you want science, fund unmanned space projects. If you want to indulge your dreams of SciFi space fantasies, then fund manned exploration – but the Enterprise is not going to be beaming anybody up any time soon.

One of the most tempting errors regarding technology is the assumption that solutions to any problem are just a matter of time. Back in the day,  Buckminster Fuller, a prime victim of this sort of thinking, predicted that we’d be traveling faster than light by now – because, you see, if you plot the top speed at which people travel over time, you’ll see this exponential hockey-stick: in 1700, we could go maybe 40 mph on a fast horse; by 1850, maybe 100 mph on a fast train; by 1950, 600 mph in a jet; by 1970, thousands of mph in a rocket – well, plot that out, and by 2000, you’re at warp factor 5 or so.

Didn’t happen, and doesn’t show any signs of happening. We may not get faster, or cheaper. We may not figure out how to keep people alive on long trips or alien planets – at least, not any time soon. Throwing money at it may not make it happen. We need more than blind hope and space cowboy dreams. Do the hard science first.

Given the above reality-check, meaningful manned exploration of even our own solar system will require planetary-level resources – it’s an estimated $trillion to get a couple guys to Mars, and that’s the kind of estimate a sane man would triple. And that’s just a brief trip to Mars, no colonies or anything.  “We” can afford meaningful manned exploration only if “we” means all or most of the industrialized nations acting together.  Would that be a good thing?

Sure, I’d love it if people were rocketing around in space, colonizing planets, and in general living out our Star Trek fantasies – but I’d like a LOT more data on how we intend to do it. For example, people speak of colonizing Mars. Let’s take a look at that:

The Trip: can we keep a large enough group of people alive and healthy for the many months, possibly years, in space it will take to get them to Mars? This is unknown – there’s radiation, there’s bone and muscle loss, there’s psychological stress. Sky Lab, ISS, moon trips – these are nice, but they don’t really answer the question. But, assuming we could –

Living on Mars: keep in mind that the bottom of the ocean and the South Pole are both far, far more habitable and inviting for people than Mars – so, just for a test run, why don’t we build a self-sustaining colony in one of those places? Y’all remember Biosphere 2? How about we get something like that to work, first off, then replicate it in a harsh environment, then run it  for a couple decades without inputs from outside? Once that’s been done, *then* let’s talk about building colonies on Mars….

Cost: it cost a couple hundred million dollars to run the Biosphere 2 experiment in the incredibly friendly environment of Tuscon, where you could drive a semi right on up to the building if you needed anything at any point, most noticeably during construction – and it failed! Now, add the little problems of 1) incredibly more harsh an environment; 2) incredibly farther away; and 3) incredibly harder to get to. Soooo – how much will it cost? How about a rough estimate of a hundred gazillion dollars… Point: nobody knows, and I don’t think anyone can even plausibly guess. A LOT, is all I’m saying.

Hate being a wet blanket – I really love the *idea* of zooming around in space. It’s just that the reality is rather discouraging, and should not be ignored by gung-ho fan club.

Here, at First Thoughts, is this link, to an article about the coming collapse of American colleges, from the Daily Caller (whatever that is).  I’ve made related comments here.

– the cost of college, especially in hard economic times, is rarely worth it except to those highly-trained specialists mentioned above.

– the chief purpose of college is to enforce a certain cultural uniformity on the ‘product’ (standard disclaimer: I have a lovely undergrad degree in classics and a Master’s in Finance and International Business. This is not sour grapes.)

Business school is particularly transparent in its function of simply screening applicants for the right stuff: to get an MBA, one must prove one can follow orders, put up with arbitrary rules and structures, complete boring tasks in a timely fashion and, more fundamentally, live quietly in a world with a certain set of economic and social structures. (for example, does bother you much that the CEO gets 100 times the pay of the janitor? That the C-suite guys and gals get to do all the jetting around and tropical vacations as a reward for laying people off? Business school tests if these things bother you enough to do anything about them. From the hiring company’s POV, any hesitation or reservations about the morality of what the company does is anathema. An MBA pretty much guarantees that won’t happen.