Setting aside Parish School by Timothy Walch (1997) and returning to The Catholic School System in the United States,  by James A. Burns, C.S.C. (1908) in order to catch up chronologically.  I read today about French efforts to establish schools in New Orleans.

Burns notes that from its founding, the leaders of New Orleans sought to bring teachers from France to found schools in the tiny colony, and were answered by the Capuchins, who set up a boys’ school in 1725, and the Ursulines, who set a girls’ school in 1727. 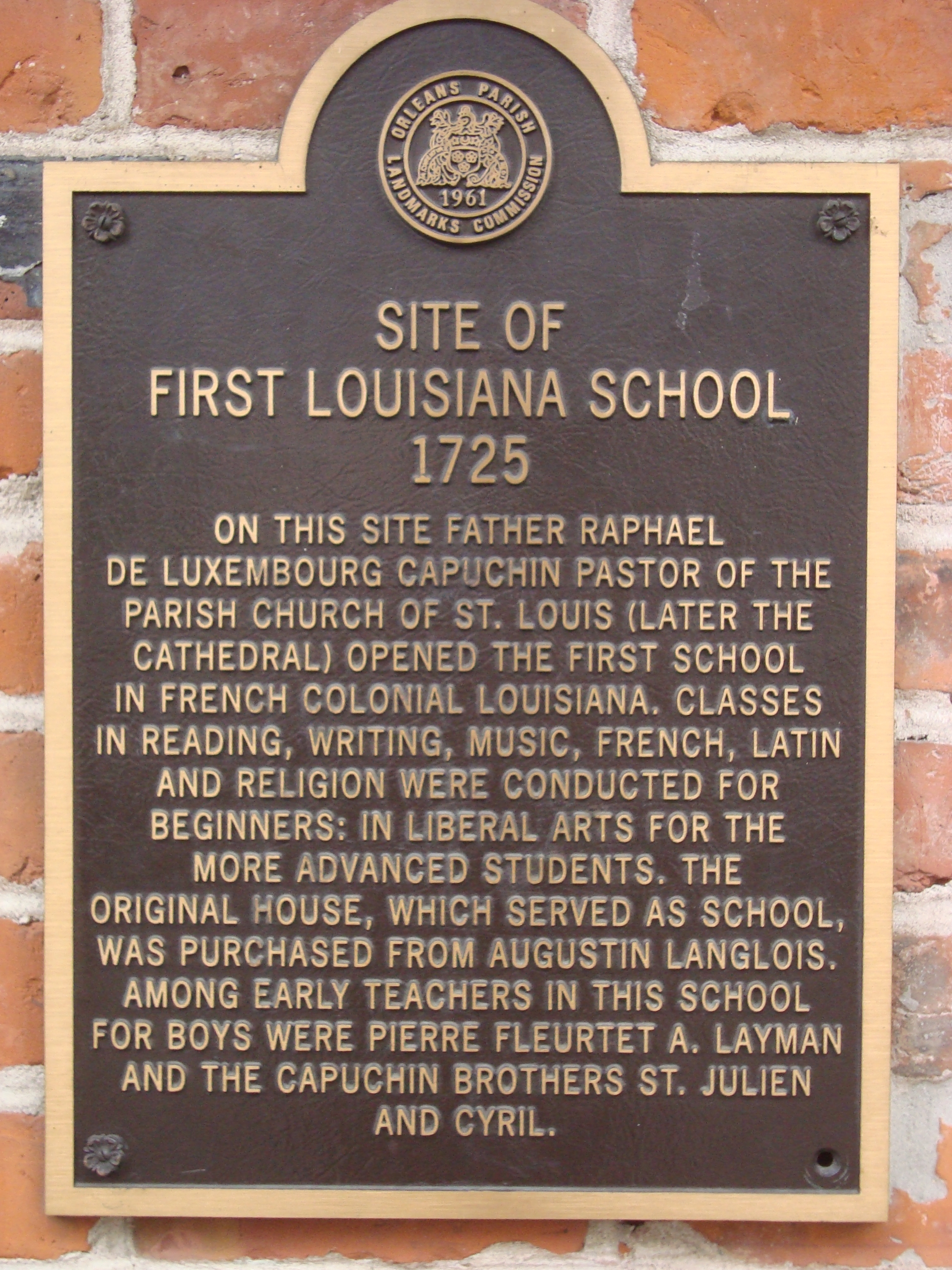 The Capuchin school is no more, but a very New Orleans style hotel stands on the spot where it used to be. The Ursuline School is still in business.

So we have here physical evidence of not only French settlement in America, but of French concern for education. Burns describes the heroic efforts of the Capuchins and Ursulines in trying to educate children; he mentions the worry of the sisters when control of Louisiana passed to the Spanish and then back to the French and then to the US. Relations with the Spanish were of a culture class nature but things got worked out. Much more worrisome was post revolutionary and ferociously anti-Catholic France resuming control. Most of the Ursuline sisters fled to Havana, leaving only nine to work on the school.

Then America took over. The French experience with Republican government did not inspire confidence in the remaining sisters, who fired off a letter to President Jefferson, who assured them that the new government would not seize their property nor interfere in the school. Andrew Jackson’s wounded troops were cared for by the sisters after the Battle of New Orleans. He returned later as President to show gratitude.

I mention this merely to point out that that’s a lot of history for one little school in a city of a few thousand people. None of this is mentioned by Walch. It is not clear what selection criteria Walch is using here. A single missionary’s school in Arizona that died when he died warrants a paragraph or two; a couple of centuries of schools in New Orleans do not.

I mentioned Walch’s dismissal of the California Missions. Here is his conclusion:

For Spain and for the Church, the California Missions were an economic wonder. The use of native labor and the favorable climate allowed the missionaries to cultivate a vast quantity of land. The fruit, wine, and beef from California were among the best in the world, but the price was high. The hard labor killed off the the native population, and the decline of the mission system in California followed the demise of the native population.

I just skimmed through the notes of the chapter in which this above quotation occurs, and, unfortunately nearly all references are to modern historians and history books. Therefore, I’d need to dig through a library in order to find actual source materials instead of having them noted in the text, which is what Burns does.

It’s a huge question: what source materials justify the movement from the position of Burns, who calls Junipero Serra a saint and the California missions a miracle that only died, along with the more than 30,000 Indian Christians. as a result of the direct action of Mexican government – and quotes and otherwise references sources to support it – to Walch’s position above? Were there not 30,000+ Christin Indians in the missions when they were seized and destroyed by the Mexican government? If the missions were dying out because forced labor was killing off the Indians, how did the mission population grow to 30,000 in the first place? That might work over a short term or given a comparatively huge population of Indians to start with, but neither of those conditions prevailed.

Or did they? A source or two could clear this up. Instead – and I don’t know Walch is doing this, but he’s failed to provide any evidence he’s not – are we going to jump on the band wagon diparaging Fr, Serra and all things Catholic in California, that was all the rage when Serra was up for canonization? Are we just buying the Fabian program of rewriting history so that it matches ideology?

I don’t know. But I’ve read enough over a lifetime to know that a modern historian is not proved more reliable simply by virtue of being modern.