First, a digression or prologue: Here are some descriptions of modern art as proposed by their creators, gleaned off the interwebs:

The picture shows how unhappy people which, is dependent on consumption, and as he turns into a cripple.

The painting shows the influence of television on the number of things we purchase.

Pity draws this exercise to a premature close. The artists themselves seem to be charmingly innocent, just trying to do what they’ve been told to do, and I don’t want to just pick on people. Simply, one could never tell, prior to the explanation, what, if anything, the artwork was supposed to ‘show’. It would be cruel, perhaps, to mix and match descriptions to artwork and see if anyone other than the artist could tell the difference.

Key point: great art doesn’t require a program to appreciate it, only, at most, a common cultural background with the artists. You have failed as an artist if you need to tell people what your work ‘shows’.

Let us pick on more deserving targets. Returning to the well one more time, here are snippets from what might be called the program that explains the cathedral in Los Angeles, from its website, with some commentary.

Spanish architect, Professor José Rafael Moneo has designed a dynamic, contemporary Cathedral with virtually no right angles. This geometry contributes to the Cathedral’s feeling of mystery and its aura of majesty.

We are being told here that the proper feeling to have when viewing this:

…is “mystery and its aura of majesty.”

Well. For comparison, I choose from among any of the thousands of great Catholic cathedrals that have been loved for generations: 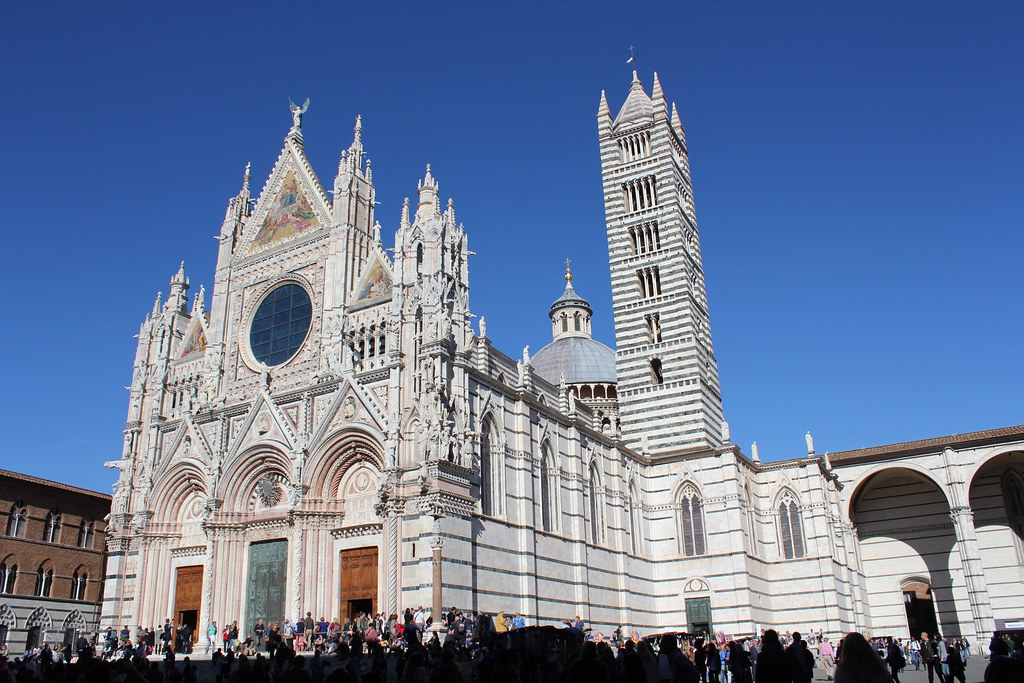 Does the degree to which you feel the “mystery and its aura of majesty” looking at the Duomo in Siena just like the feeling you get looking at the L.A. Cathedral? In any way similar? (Spoiler – having stood in about the spots each of these pictures were taken: no, the feelz are not similar. While the pictures in each case greatly tone down the effects, they do accurately engender them.)

In the first picture, the lack of right angles is supposed to contribute to our feelings of mystery and majesty. In the second, I think maybe it’s the awe-inspiring beauty that gets that done.

The challenge in designing and building a new Cathedral Church was to make certain that it reflected the diversity of all people.

Rather than duplicate traditional designs of the Middle Ages in Europe, the Cathedral is a new and vibrant expression of the 21st century Catholic peoples of Los Angeles.

None of whom were consulted nor approved of this design. Just saying.

“I wanted both a public space,” said Moneo, “and something else, what it is that people seek when they go to church.” To the architect, the logic of these two competing interests suggested, first of all, a series of “buffering, intermediating spaces” — plazas, staircases, colonnades, and an unorthodox entry.

Um, what? Setting aside the weird circumlocution beginning with ‘something else’ that clumsily avoids talking about God and salvation, there’s an ancient tradition of providing transition from the external to internal worlds. Note, for example, the lovely piazza in front of the Siena Duomo leading to steps and awesome huge doors. It’s perfectly clear as you assend the steps from the piazza and approach those doors that you are moving from the public to the sacred. With its steps, levels, plaza, long confusing ambulatory, the L.A. Cathedral merely awkwardly overdoes it.

The Cathedral is built with architectural concrete in a color reminiscent of the sun-baked adobe walls of the California Missions and is designed to last 500 years.

…which adobe was always whitewashed, often painted, and adorned to the fullest extent the people could manage. That ‘designed to last 500 years’ always seemed like a threat, but maybe that’s just me…

The Cathedral’s interior design captures the principle of a spiritual journey.

The painful and unsettling part? Chesterton talks about how Catholic art favors the gentle, suffering Jesus over the ‘Woe and Temple-cleansing’ Jesus because gentle Jesus is easier to approach in prayer. I guess we modern Catholics are tougher than that!

Unlike most Cathedrals, we are not entering through a rear door near the last pews. Rather, we enter the ambulatory which circles the interior of the Cathedral.

This gets to the entire point of this preamble: one would never suspect there was anything wrong or lacking in the approach and entrance to a traditional cathedral unless he were *told* there was something lacking. To recap: one enters a traditional cathedral typically by crossing a plaza to ascend steps, passing through massive doors and under a tympanum which usually depicts the Last Judgement, entering into an awe-inspiring nave, flanked by lines of columns leading to and focusing attention on the high altar. Many, many people over the centuries have commented on exactly how moving that experience can be.

But not in L.A.! Here, we need to be told that we’ve been missing something, and told we should love and prefer a meandering, pointless, artificially long entrance.

Our betters will tell us what to think. If we don’t like it, well, that just demonstrates why they are our betters!

The ambulatory urges us forward, on a slight incline, heightening our sense of an upward journey, past various devotional chapels that open onto the walkway, not onto the Cathedral’s worship space, allowing a more meditative environment for devotional prayer.

The light and diversity of shapes draws people forward along the ambulatory and around the corner to the Baptistery and the enormous public worship space.

When I first began this blog, I wrote a number of items on symbols versus signs. The key distinction: symbols have meaning that does not need to be explained, or, at worst, once explained ‘clicks’ – the church uses red symbolically on the feasts of the Martyrs. Any questions?

Signs, on the other hand, will sometimes employ symbolism, but are more conventional in their meaning. Stop signs are traditionally red, but that they mean ‘stop’ is conventional. Red is a good color for this, but not necessary to get the point across. Blood, and therefore martyrdom, and red are connected in a way that stopping and red are not.

Signs can be made much more powerful by the artful use of symbols. In the old days, banks, which engage in the most abstract and ephemeral of businesses, made their buildings out of stone, as a sign of permanence. Good use of the natural symbolic content of stone – hard, enduring, not going anywhere – to communicate what they wanted to communicate – See? We’re not the fly-by-night operation you might reasonably suspect us of being! Solid as a rock, you might even say.

Gestures can also be symbolic, having meaning independent of social convention. Bowing and kneeling are gestures your dog understands. This doesn’t have to be the case – shaking your head for no and nodding for yes are, I hear, conventional. But I will contend that there is a large range of human gestures the meanings of which are not conventional, or at least have a core meaning conventions hang off of.

The whole preamble of this essay was intended to show how we, in the modern age, often try to gloss over with words of explanation the symbolic content or lack thereof of art, gestures, and actions in general. The L.A. Cathedral is known as the Taj Mahoney, because many people saw right through the pretend taking of input and invocation of diversity as attempting to veil what was essentially a $200M+ exercise in hubris. Both symbols and signs were involved in getting this project through – mitered cardinals in long processions, masses, blessings – but a key was blowing smoke, smoke illustrated in the snippets quoted above. What you see is not what you see – we will tell you what you see.

All this ramble was occasioned by an observation at mass yesterday. One universal symbol, a gesture that, again, your dog understands, is turning you back. Your dog knows that you are withholding approval or showing disapproval when you turn away from him. By dozens of gestures, we turn our backs on the Eucharist both literally and figuratively. As a symbol, this gesture has its meaning and emotional effect regardless of the words – the artistic program – used to explain why that’s not what it means. What you see is not what you see – we will tell you what you see.

This turning has been ritualized to the point where failure to comply makes one stand out, so very few people, even among those who understand what’s happening on some level, will buck the behaviors.

Before I go on, let me say that there are more or less reasonable reasons for many of these gestures. Taken separately, each might be OK in the sense that there is at least a sound theological or practical debate possible on the topic. Taken together, however, and it’s clear the goal is to change theology, or to express a theology already changed.

Let me count the ways:

These are the most literal and obvious cases of turning your back. Other similar issues:

Anyway, I find myself more in favor of any gesture that marks the Mass and the physical church it is celebrated in as sacred. We are a people set apart. High time we started acting like it.

14 thoughts on “Symbols & Turning One’s Back”