Speaking of getting more circumspect the more I learn, treading more carefully on evolutionary topics these days than I used to. Thanks to those who have brought more depth to my understanding here and at other blogs and such, especially Mike Flynn. Of course, my continuing lack of understanding is nobody’s fault by mine. Onward:

There are here both a basic idea and a basic problem that war, or at least are made to war, with each other. First is the grand idea, not quite so grand as many imagine but grand nonetheless, of species arising under the pressure of natural selection. Darwin spends the first part of the Origin of Species (note: origin of species) discussing how farmers have always, more or less consciously, artificially selected the most desirable plants and animals for breeding and thus perpetuation. That’s the model to be kept in mind always when considering Darwin: natural selection is to be understood as analogous to what a farmer does. 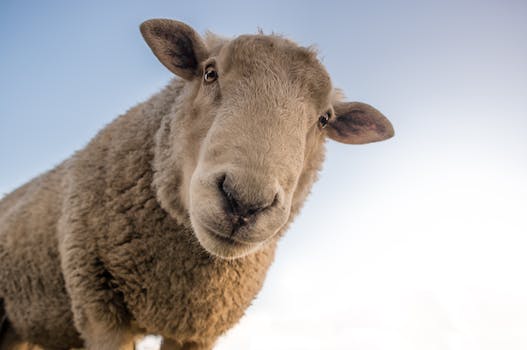 A funny thing often missed: a huge part of the selection pressures that bring about the differences between farm animals and plants and wild animals and plants is only very indirectly, if at all, under the farmer’s control. One might even say the species of farmers are selected for naturally by how well they succeed in accounting for and maneuvering around the characteristics of the environment they find themselves in. A farmer might want and select for sheep, say, which are large, sturdy, wooly, fat, docile, easily herded, fast growing, fecund, white and so on. But he might be trying to select for these characteristics in a time and place where grass periodically fails, wolves periodically descend, weather sometimes doesn’t cooperate, and so on – which might select, so to speak, against his wishes: maybe agile, smaller, less wooly sheep can more easily avoid the wolves, find enough food and not get heat stroke in the place the farmer happens to be farming.

The farmer must work with what he’s got, the nature of the place he’s farming. These environmental issues are on top of the issue of the nature of sheep in themselves. Read somewhere once that centuries of animal husbandry have resulted in sheep something like four times the size of their wild precursors. Bigger sheep probably mean more wool and meat, which one would presume are desirable traits in themselves. Why not 5 or 10 times? Did no farmer anywhere want giant sheep? Or is it simple a fact about sheep that they can get so large but not any larger and remain viable?

The farm animals we have today as compared to their wild precursors present the differences which stand at the heart of Darwin’s argument. Those differences were selected for. Plants and animals that did not have or had less of a desired characteristic got eaten first or otherwise were not allowed to breed. This selection process was some combination of intentional and accidental. Outcomes, such as larger sheep and more fecund wheat, are limited by the nature of the living thing.

On an even larger scale, biologists speculate on physical, mechanical limits, e.g., the upper limits on the size of living things. The largest dinosaurs are thought to have approached the limit of the largest land animals mechanically possible: any larger, and the skeleton needed to support it, heart needed to pump its blood and so on become infeasible, at least as currently understood. (1) Whales, freed to some extent from the bounds of gravity by the water they float in, have their size limited to about how big blue whales are now by how much food an animal can find per unit of time. Same sort of logic applies to birds, plants, insects, single-cell organisms and so on – there is a mechanical limit to how big (and, I suppose, how small) they can get.

Finally, the environment of Planet Earth as it stands now limits living things to those that can tolerate or avoid an oxygen-rich atmosphere, who don’t breath methane, and on and on. We even say ‘life as we know it’ to distinguish all possible forms of life from the life on earth we see now and recognize in their remains from the past. We don’t know, of course, that there exist other forms of life, nor if such presumed other forms are even possible. But we generously make allowances. Such forms, if they exist, would presumably have their own physical limits based on their own environments.

Natural Selection is thus limited in the same way. Naturally limited, even. Grand, beautiful, but not all powerful. Darwin sees evolution in the sense of change everywhere he looks in the natural world, and does a good job over the rest of the book in pointing out similarities and differences between species to make his point: simply living in an environment as complex and competitive as the natural world creates selection pressures analogous to those farmers have managed for centuries. Natural selection is thus artificial selection, merely without the farmer.

The basic problem is that we do not know how far this idea of selection goes, either across time and complexity or across the range of physical and behavioral traits. We, meaning the set of people who consider themselves convinced by Darwin’s theory, are sore tempted to see evolution everywhere. Just as in the old saying about how, if you have a hammer and sickle, everyone looks like a Kulak, if your hammer is Darwin, everything looks like the result of natural selection.

But I joke. A little.

We see people assuming with no evidence, certainly no evidence of the kind Darwin presents in Origin, that life arose and will arise from dead matter anywhere proper conditions allow. Natural selection is credited, somehow, with creating life itself, even though Darwin’s arguments are about speciation in already existing living things. The arguments (if not Darwin himself) assume species already exist upon which natural selection can act. Just as Marx replaces Hegel’s Spirit (God) of History with a History that has all the characteristics of a divine Creator except it isn’t, nope, not at all, the non-scientific Darwinists replace rational argument extrapolated from what real-life farmers do with real plants and animals with, essentially, magic. It’s Professor Xavier’s Eeevolution, making Great Leaps Forward. A dead hand becomes a live hand; a blind process somehow sees the future. And it works, I suppose.

Further, and I forget who pointed this out, natural selection is given a special pass, even by scientists who should know better, when it comes to providing explanations: simply describing an approach that sounds plausible is given the same weight as an actual scientific demonstration. I fall for this all the time: giraffes evolved their long necks from short-necked precursors when those ancestors with longer necks starved a little less frequently than their shorter-necked competitors, as they could reach the leaves higher up in the trees. Over thousands of generations where longer and longer necks became a more dominant trait of the survivors, we ended up with giraffes as we now know them.

Right? Except there’s no real evidence this is what actually happened, and there’s the counterexample of all the other grazing animals that don’t have comparatively long necks. There was no survival advantage to the longer-necked zebras and gazelles? Why not? Why does the same exact logic not apply to those species? It is also the case, so I hear, that giraffes tend to be left alone by lions as they are huge and can kick your head in like a Pierson’s Puppeteer. Does that feature figure into it? How? Sure, it may very well be the case that long necks, coupled as they are with long, strong legs and huge, strong bodies, provided exactly the survival advantage described. But it’s a guess, not a demonstration or proof. Further examples of this sort of ‘here’s a nice story that PROVES evolution’ are legion.

Lurking here is the idea that *everything* about a living creature must be explicable by means of natural selection. Really? Why? How would one demonstrate or reason his way to such a conclusion? When it is assumed that life arose spontaneously from dead matter, such dead matter is tacitly assumed to have certain biases toward life. While it is mandatory not to say dead matter wants or prefers anything, you really cannot logically  avoid the idea atoms and molecules like, shall we say, certain life-favoring arrangements over other arrangements, at least enough of the time; atoms and molecules like to arrange themselves in such a way as to catalyze the formation of similar or duplicate molecules.

Here’s another good story for which there is no evidence. Here is another example of the sort of thinking that asserts in other contexts that History is not a conscious being acting as a god, it just behaves indistinguishably from one, so much so that it rains hellfire on those who get on its bad side.

I’m perfectly happy to say, scientifically speaking, that we don’t know how life arose. Because it’s the truth.

The theory has been extended way, way out beyond the headlight, driven by, it seems, untethered uniformitarianism(2) and perhaps unconscious Hegelian progressivism.

Now take the observation that natural selection acts as much on behaviors as on physical traits. Teeth and claws do a lion no good unless it also uses them to hunt and kill. We can now combine all the issues above into the hot soup of Sociobiology, or Evolutionary Psychology, or whatever other name we call the creation of just so stories to explain what people do.

Did natural selection contribute to human nature, scientifically speaking? Sure! Do we understand how and to what end? No. Partly because all we see are the presumed results as nobody was around to witness the process, and partly because, again, we don’t know that natural selection is the sole cause of all human behaviors. We might want to believe it to a greater or lesser extent, but we just don’t know.

Finally, when our own minds are the tool used to examine our own minds, we are even more at risk of seeing what we want to see and missing what’s right in front of (or behind, as the case may be) our noses.

One thought on “Evolution & Society”