After the cheery weekend of pizza, steak and ciabatta, was fortified to take a look at what passes for science – Science! – on the Google news feed.

It’s not getting better.

First up, USA Today – which we’d laugh off, except many people don’t – ran the usual breathless article on yet another giant iceberg breaking off an Antarctic glacier: Iceberg 4 times the size of Manhattan breaks off Antarctica. Now, back, way back, when I used to write jokes for an internet humor list and magazine, the joke was that peak USA Today would simply not have text at all, as its target audience was looking at the pictures and, presumably, hooting and perhaps jumping up and down.

As it is, the text remains minimal, and minimally useful. In this 7 paragraph, 10 sentence article (with 2 pictures and a video), we are of course given no context – are giant icebergs calving off even more giant antarctic glaciers good, bad or indifferent? How would we know? Nope, instead we get this:

Is 45 billion tons of ice a lot? Is it increasing, decreasing or remaining constant? Over what period of time? Seems kind of important if one wanted to make any sense of these factoids. Also, so sea levels are rising? Thought the data was a bit ambiguous on that point; at least, the rate of rise is so small that, were it to continue (and why would we suppose that? How sure are we?)  we’d have many generations to address any inconveniences it might cause.

But I’m doubting this iceberg is doing much as far as raising sea level. The picture shows this: 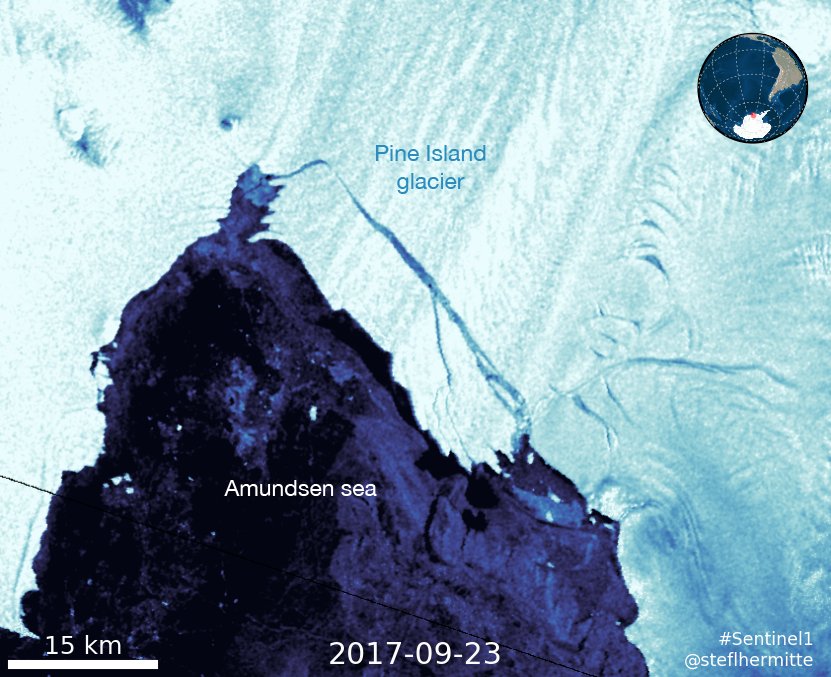 That looks an awful lot like the leading edge of the glacier is already in the water back for miles – can’t be sure from the picture, but that’s what it looks like. What this would mean is that the ice is already displacing as much seawater as it’s going to displace when it melts, so that, like ice melting in your glass of ice tea, the change from ice to water in itself isn’t going to raise the water level. (Now, if the water melts and then heats up enough, then it would expand, and that might raise sea level, but the melting itself isn’t going to.)

Next up was advocacy disguised as reporting, where the discovery of bits of plastic in the arctic ice means we must immediately institute a totalitarian world government or we’re doomed – something like that, the reasoning was a little loose. Not gonna link.

Finally, somehow, some real science – well, material technology, really, but I’ll take it – made it past the keep it stupid filters: Nanoparticle Supersoap Creates ‘Bijel’ With Potential as Sculptable Fluid

A new two-dimensional film, made of polymers and nanoparticles and developed by researchers at the Department of Energy’s Lawrence Berkeley National Laboratory (Berkeley Lab), can direct two different non-mixing liquids into a variety of exotic architectures. This finding could lead to soft robotics, liquid circuitry, shape-shifting fluids, and a host of new materials that use soft, rather than solid, substances.

Sounds cool and sci-fi ready! Combine the usual apocalyptic AI stuff with goopy robots, and you get: B.O.B.!

The study, reported Sept. 25 in the journal Nature Nanotechnology, presents the newest entry in a class of substances known as bicontinuous jammed emulsion gels, or bijels, which hold promise as a malleable liquid that can support catalytic reactions, electrical conductivity, and energy conversion.

This kind of stuff is really where it’s happening, and has long been. We love our Newtons and Einsteins, but it’s the schmucks working away in some lab trying to put cool ideas into practice who do the real heavy lifting as far a making life materially better. Everybody knows Galileo, who personally contributed next to nothing to astronomy that somebody else didn’t find at about the same time – he was part of a cohort of star-gazers who fell all over each other discovering the same stuff, often within days of each other. But who knows the names of the people who brought us the Green Revolution, nitrogen fixing tech and all these varieties of plants that now make famine the result of political and not natural problems?

And a hundred other things. Cell phones work – that should blow your mind. GPS works. CAT scans work. And on and on. All required a lot of basic science – but vastly more applied tech. Bijels seem a promising field for yet more cool and life-enhancing tech.

“Bijels are really a new material, and also excitingly weird in that they are kinetically arrested in these unusual configurations,” said study co-author Brett Helms, a staff scientist at Berkeley Lab’s Molecular Foundry. “The discovery that you can make these bijels with simple ingredients is a surprise. We all have access to oils and water and nanocrystals, allowing broad tunability in bijel properties. This platform also allows us to experiment with new ways to control their shape and function since they are both responsive and reconfigurable.”

One thought on “Science! It’s Not Getting Better”