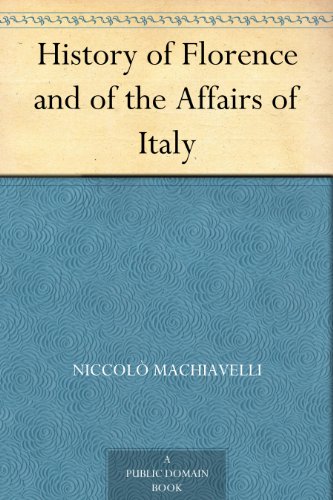 Written toward the end of a lifetime (1469 – 1527) spent as a diplomat and adviser, Machiavelli’s History of Florence and the Affairs of Italy is not the book of his most people read – that would be the Prince, the realpolitik described within it giving us the adjective Machiavellian.

Since I first read the Prince as a youth, I’ve belonged to the minority of non-Italian readers who think the amoral and murderous advice he gives is rather more a cautionary tale than advice per se – that Machiavelli, who pleads throughout for the particular prince to whom the book is dedicated to take action, is hoping to avoid, as much as possible, the violence he describes from copious historical examples. But that’s decidedly a minority opinion, outside of Italy.

Among Italians, I’ve been told, Machiavelli is viewed much more as an Italian patriot than as an advocate of Athens’ position in the Melian Dialogues (“The strong do what they can and the weak suffer what they must.”). And so I wanted to read this, his history of the city and nation he so clearly loved.

The book opens with the Fall of Rome, giving what I assume is the 16th century Italian angle on the Vandals – Stilicho and his family – and Visigoths – Alaric and his – and the End of the World, as Lafferty would have it. By the 16th century, it is more than a little odd to talk about Italians as if they could be distinguished in a practical sense from the Germanic auxiliaries/invaders/settlers from which a huge percentage of the norther Italians were descended. Nonetheless, there’s a pro-Italian flavor to Machiavelli’s account I don’t see in Belloc’s or Lafferty’s.

Then comes Odoacer and about 6 centuries about which I know so little it is hard to follow. Turmoil is the main theme here, as it is for almost all history almost everywhere. Italy was shattered, eventually, after the Fall of Rome, and spent the next 1500 years trying to pull itself together.

One main thing gleaned from this period: with all the turmoil, all the ambition petty and grand, that resulted in the endless bloodshed and war and intrigue, it’s much more easy to find some sympathy for the  various popes and their bloodshed, wars and intrigue. Toward the end of the book, Machiavelli says that it’s best, when there’s a choice, not to make alliances with popes, as they don’t generally rule long and you never know what the next one will do. That, (I liberally paraphrase) and the pope might just have religious considerations that muck things up!

Not in any way attempting to excuse the often brutal and murderous behaviors of many of the popes especially starting in the 15th century, just pointing out that a pope back then actually needed armies and land if he didn’t want to spend his reign locked up in somebody’s closet. As bad as a pope might occasionally be, the secular princes could be counted on to be consistently worse.

Things picked up for me in the 13th century, as I started to see more familiar names and her more familiar stories, mostly familiar from having read Dante (he puts in a brief appearance) and art history.

Starting with the 13th century, the History gets to be much more detailed. As the 15th century starts, Machiavelli begins to go into much more detail, as the events were still in living memory when he was a boy. Finally, as 1500 approaches, he starts referring to the Florentines as ‘we’ – this is the history he lived through.

And what a troubled yet glorious time it was, with Lorenzo the Magnificent rising to power, surviving an assassination attempt that claimed his brother, attacked by both the King of Naples and the pope, deserted by allies in Milan and Venice, making a daring trip to Naples to seek reconciliation with the king, succeeding, and then sending ambassadors to the pope – and succeeding again! – riding out troubles at home, and coming out of all that as the most powerful man in Italy, pretty much.

While Machiavelli only touches lightly upon it, at the same time all this violence and insecurity were afflicting Florence, more great art was being produced in that one little corner of the world than anywhere else in such a small place any time in history, with the possible exception a couple of centuries in Athens. Truly amazing.

C. S. Lewis advises one to read an old book each time you’ve read a new one, or, if you must, after each two new ones. You could do much worse for an old book than the History of Florence.

One thought on “Review: Machiavelli’s History of Florence and the Affairs of Italy”