A. Good story here from Calah Alexander: Why you should let your kids take risks — especially when they might fail.

I’ve said that I’d never let my kids try a 10-day  (unsupervised European trip – ed) in college, because what if what could have been for me comes true for them? What if they get lost, or mugged? What if they make a poor decision, choose the wrong stop, and get stranded outside an airport in a blizzard? What if they need help and can’t find it?

That one major snafu on our 10-day happened at the end, when we missed our flight back to Rome because we got off the train at the wrong stop. The airport in Brussels wouldn’t let us spend the night inside, so we huddled against the building instead, trying to stay out of the snow. The only thing we had to eat was a backpack full of Cadbury chocolates that my roommate had gotten in London.

As a parent, this story is terrifying. But it’s one of my favorite memories. We made it back to Rome cold, tired, sick of Cadbury, but alive and newly aware of our own resilience (and of the importance of navigational skills).

Ironically, protecting our kids from the pain of failure is itself a failure. It’s failing to let them experience the life we know is coming at them, the life we can’t protect them from forever.

Real choices matter to the kid, are supported by the family, and have real consequences. Leave out any of those three things, and the choosing is an illusion.

One final thing to add: kids also need to see adults sticking with the results of their own decisions. If mommy and daddy are running away – from their responsibilities, their spouses, their own kids – it becomes pretty much a given that the kids will grow up into bitter, whiny irresponsible brats. We wouldn’t want that to happen.

B. Another chart showing something or other: 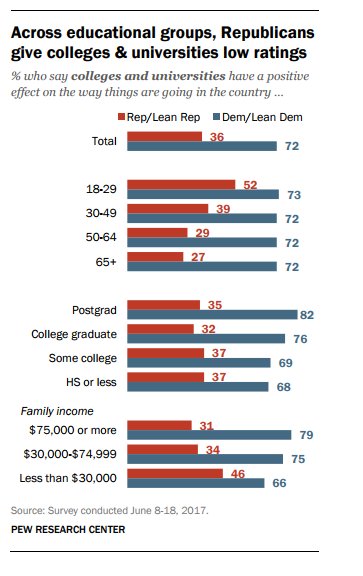 It’s from Pew, whose methodology is both widely respected and, to give them the benefit of the doubt,  hopelessly flawed. In general, unverified self reporting by the  sort of people willing to take polls, with no concern wasted considering if the responder is at all motivated to tell the truth. (1) The questions tacitly assume that the world really does fall into convenient polar positions on virtually every subject. Which would be really, really convenient – for pollsters. So don’t give Pew polls much weight, in general.

By happenstance, about the same time I saw this I read a quip somewhere, to the effect that ‘Sir,’ Ma’am,’ and ‘Thank you’ will get you farther than a bachelor’s degree. Had to wonder: what’s the overlap between those red bars above and people who would nod at the folk wisdom of that quip? I’d quibble that a bachelor’s in something real PLUS the proper use of sir, ma’am and thank you is the real winning strategy. Nevertheless, with Pew, is often not difficult to see which of the two either/or points of view they’re hammering the world into they want us to consider enlightened.

C. Something stupid for your possible amusement:

Something about rabbits and chickens, creatures with largely unearned reputations as pacifists, going all Wild West there’s-a-new-sheriff-in-town that cracks me up a little.  One struggles a little coming up with the proper Darwinian just-so story that explains such odd behavior away.  Why are the chickens not content to let the rabbits kill each other if they want to? Have they adopted them, somehow?

D. Apologies. This is plain stupid. This is what an adolescent sense of humor,  + <45 seconds of  web searching  + <10 minutes of  MS Paint will get you: