Since our Elder Daughter has to head back to L.A. tomorrow for classes starting Tuesday, we opened Epiphany presents today. Silliness reigned. I got:

So far, I’ve only corrupted the very local youth, and only for 25 years – but a man’s gotta dream! Plus, the cup, and the others pictured below, were each full of 23 pieces of homemade caramel and peanut butter fudge. Corrupting the tooth, as well.

Elder Daughter works in the office of a small 1-12 Catholic school, so, yea, one dam project after another; Middle Son is a lover of puns and other broad, eye-rolling humor. (Insert appropriate joke here, such as: It’s all fun and games until somebody loses an eye. Then the game is ‘Find the Eye’.)

Speaking of projects, Elder Daughter gave the Caboose this bit of handcraftiness: 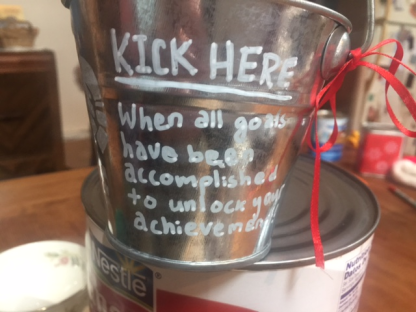 The text reads: “Kick Here when all goals have been accomplished, to unlock the achievement” As we say around here: JD! As in Just Darling.

The tiny bucket isn’t as tiny as it may at first appear, because that is no normal can of milk upon which it sits: 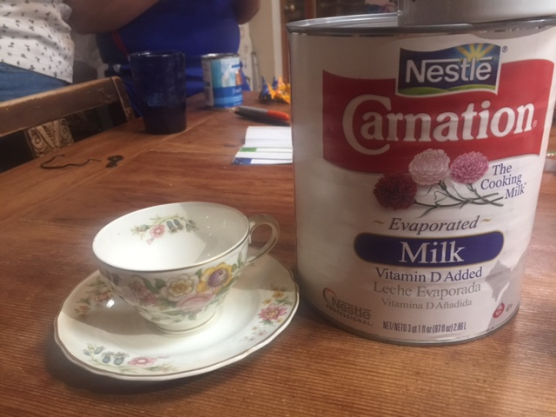 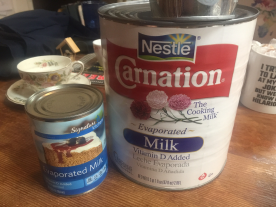 Or HUGE can of milk? 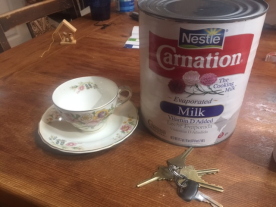 HUGE can of milk!

Mrs. Yard Sale of the Mind both drinks a lot of tea lightened with canned milk and bakes up a storm.(1) Thus, when I go grocery shopping, I just pick up half a dozen cans of evaporated milk even if it’s not on the list. If it is on the list, it’s a dozen cans. If we’re down to our last 3-4 cans, we’re on the verge of running out. So, Elder Daughter spotted this massive can (the recipe on the back is for pumpkin pie – 48 servings worth of pumpkin pie) and knew it was perfect. It will be gone in 2 weeks, max.

And there were other sweet/thoughtful/needed gifts as well. Like most Americans, I imagine, we really have more than enough stuff. It really is the thought – and the love – that count.

Marry Christmas and a Happy & Holy New Year to you and yours, and thanks for reading!