I’ve got stuff to read and stuff to write, so of course I started not one, not 2, not three, but 3 and half projects. Not quick ones, and, with one exception, not finished ones, either – well, take a look:

The Project That Shall Not Be Named, except to call it the most over-engineered compost container known to man: 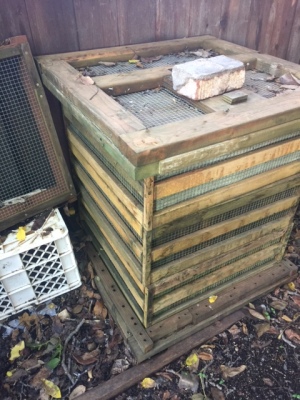 The close-up shows how what is basically a wooden box to throw vegetable scraps into is made of numerous little pieces of oak screwed together in a complicated way, backed by wire screen to keep the rats out, with the screen backed by old pieces of wainscoting to keep the temps up, and the whole thing coated with greenish anti-fungal copper-based wood protector. Two coats. Hinged door, anti-larger vermin brick deployed.

Sheesh. Well, not only does it work OK, unlike my other projects, it done, and has been since this summer, making it the only one of my summer project begun, finished and deployed in summer.

It gets better (I hope): 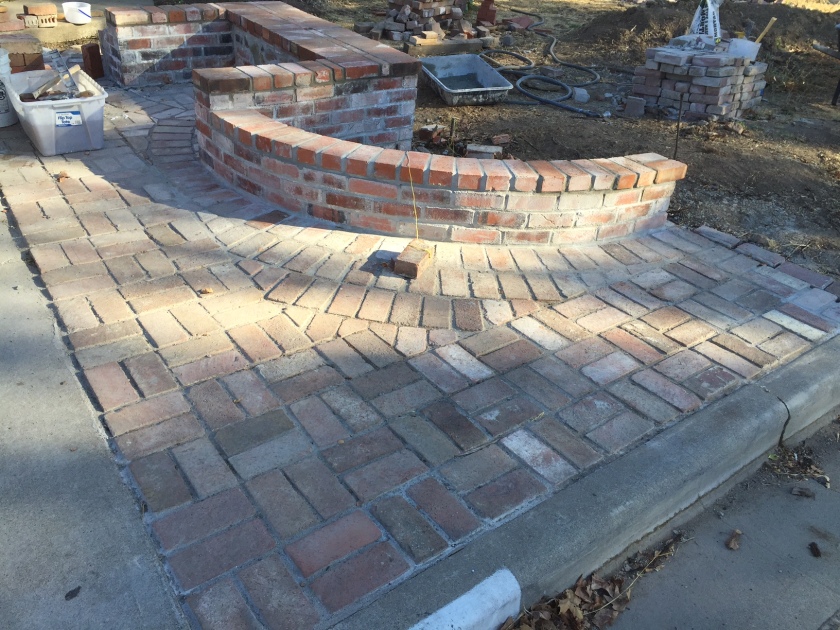 Front walk next to the driveway, two planters for trees and a bench. The full project includes a 36′ brick walk along the street side, and 12″ planters formed from parallel brick walls behind the walk and along the property line opposite what’s shown above.

Over the last couple years, my family and I have scrounged free bricks via Craig’s List. For this and, to a lesser extent, the next project, I have cleaned the mortar off of well over 2,000 bricks. Most are still in stacks and piles, some of which are visible in the background.

Had to stop here for the winter – too damp, not enough light. If by chance we get a full week or more of dry weather, I might continue this before next spring. But I kind of doubt it – one needs to pretty much go all-in on something like this.

The What Was I Thinking? Brick Oven: Once you’ve got a pile of bricks, why not make a brick oven? They’re so cute! 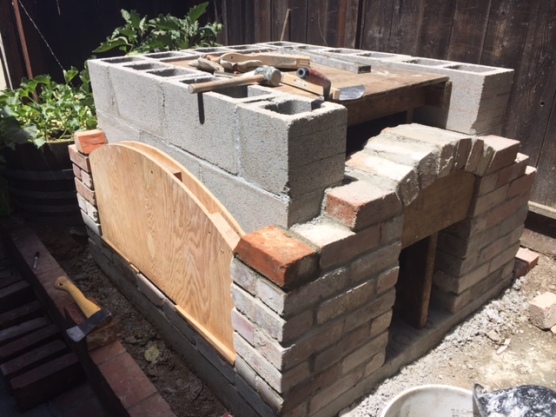 The above is just the base. On top, one builds a baking floor on top of 4-5″ of perlite insulation, thus:

Those are fire bricks, the major expense of this project – everything else I got cheap or free. All set to build the oven walls and barrel vault, then the outer walls, then lay in more insulation, then roof it over. Am going to deploy Mexican tiles as highlight and a Guadulapana (1) in tiles within that side arch seen in the first pictures. Unlike the front brick project, if it stays dry for a week or so and I’ve got the weekend time, I could conceivably work on this and have it ready for next spring! But I wouldn’t bet on it.

The Trees You Don’t See! It took me years to get started on the front walk project because, first, there was this large walnut tree in the yard (the cause of all the cracked pavement and curbs you may notice in the pictures) that had to come out. Now that the walnut tree is not there, we will plant some other trees: we have a Japanese maple that I’ll move to the front planter (it is too old, so the move will most likely kill it – oh, well, it can’t stay where it is, so we’ll get another one if it dies), a dwarf fig in a half-barrel for the planter nearer the house, a citrus tree in another half barrel that our eldest son of blessed memory started from a seed many years ago – it’s way too big for the pot. And we’re picking out a peach, an apricot and two avocado trees. So instead of a useless lawn, we’ll have a tiny orchard.  This is only half a project until we’ve ordered the trees – then, it becomes a real project. Them’s the rules.

Remember That Old Walnut Tree We Took Out? Hated to kill it, but it was old and leaning toward the house, so it had to go. I found an urban lumber hobbyist who was willing to take the larger pieces to mill them. I asked if he would give me a couple pieces, and he said yes. Well, today he showed up:

Those are about 16 7′ x 11″ x 1″ pieces! Wow! What a nice guy, I’d have counted it a great deal if he’d given me 3 or 4 pieces. Around 9 of the pieces are good solid lumber, no holes or bark, minimum knots; another couple are almost as good, and the rest have plenty of bark, knots and holes but some useable wood.

Got to let them dry for 9 months to a year, got them stickered up in the garage. Then, I’ll build something – a chest or a table, something like that – for the four living kids and my wife. Gonna need a better planer….

Now, the daylight is short and the days damp, so I turn to inside projects. Like, maybe, reading some books and writing some stuff.