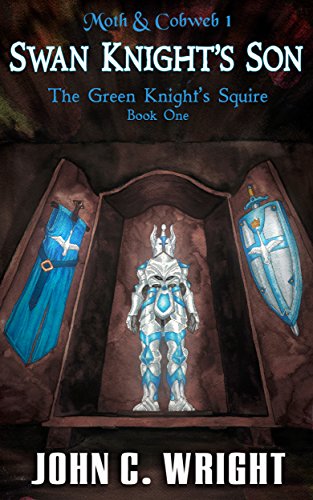 Short and sweet: Swan Knight’s Son is a lot of fun, charming and even a quick read, which is not something one can say about most of John C. Wright’s typically much longer books. It is, as far as I know, Mr. Wright’s first foray into YA fantasy. Am now reading it aloud to our 12 year old son, who laughs out loud, especially at the antics of the Ruff the magical dog and Bruno the one-eyed bear dojo master. Fun read for a grown-up, but more fun read to a tween, if just to see his reaction to the comic relief. First in a series, buy it now so you and your kids can rip through it and wait impatiently for the next installment. Well, click the link – what are you waiting for?

As the Amazon blurb says: “SWAN KNIGHT’S SON is the first book of THE GREEN KNIGHT’S SQUIRE, the first volume of MOTH & COBWEB, an astonishing new series about magical worlds of Day, Night, and Twilight by John C. Wright.” I have only one question, and perhaps I need to address it to Mr. Wright’s muse: Here, for the first time outside a short story, Mr. Wright expounds and explores a merely dazzling array of ideas and sources. This, as opposed to his typical 2+ novels worth of ideas per chapter amidst a few dozen references to classical and world mythology and the fringes of science, with character names both evocative and really, really long. Well, Miss Muse, are you going soft? Not that I mind or anything…

Silver-haired Gilberic Parzival Moth is a kid as remarkable as his name, who gets thrown out of high school for busting up some kids and drugs situation. He perhaps used a little too much force, and perhaps got on the wrong side of the principal for reasons he doesn’t understand. He and his mom move around at the drop of a hat, crossing the country, and he fears that she will make them move again. After a lifetime of having his mother answer his questions with evasions and riddles, he wants to know why they have to move all the time, why they seem to always be hiding from something, who his father is, indeed, who he is.

Things get a little spooky. Gil takes it for granted, as totally unremarkable, that he can talk to animals – when he says a little bird told him, he means a little bird told him. Ruff, the dog, is both completely dog and wiser than most people, always ready with enthusiastic advise or a dead squirrel as the situation calls for. One night as he heads home very late, Gil sees all the townspeople walking in a trance, and is warned away and rescued by someone he cannot see from inside a boarded up church he could not possibly have gotten into – yet there he is.

His beautiful silver-haired and ageless mother is ready to move again, but ends up merely throwing Gil out of the house – he can’t go back to school, so he must find honest work. She will not let him sleep at home, and she does not want to discuss the doorway that appears wherever they live – on the proper nights when the moon is full – leading somewhere  decidedly else.

So Gil and Ruff set out to get Gil a job – and thus the adventures begin. Talking animals, mermaids, knights, elves, and a fight for his life. That’s about all I can say without spoilers, and you really don’t want spoilers, you really want to go buy this book and read it. Really fun book!