A. Better Living Through Chemistry. I think the critical aspect of the herbicide Roundup for us suburb dwellers is the sense that one has Done Something. Sure, I could grab a hoe – as the son of my farmer father, I have decent hoe-chops (ha!) as a birthright – or even, God forbid, get down on my hands and knees and *pull* those kale-without-a-P.R.- firm members of the Green Stuff family. But what fun would that be? Instead, through application of a *gasp* chemical substance, I can feel good knowing that those leafy bastards have been Taken Care Of. And I didn’t even have to bend over.

Then there’s the whole p*ssing off the right people aspect of the thing. By now, millions and millions of gallons of Roundup have been sprayed on virtually every acre of land where people live that isn’t paved – and a lot of the paved stuff, too. Not much bad has happened. So, while the chemicals in Roundup are no doubt bad for us in some as yet to be determined concentration, so far, if they were bad in ways that, say, water isn’t, it seems that we’d know it by now, what with the inevitable mounds of corpses and armies of mutant zombies. Ya know?

The proper attitude is simple prudence. Use only as much as is necessary, and pay attention to what happens. And just pull the dumb weeds on the side yard, for crying out loud!

B. In yesterday’s science news as recapped in the previous post, this deathless line appeared in the abstract to a paper in Nature:

I focused my attention on making fun of the absolutely technically correct yet odd-sounding phrase “ultracool dwarf star” by imagining they were thinking of Peter Dinklage – yes, I am that childish. But today, we kick it up a notch, and take on the preposterous adjective ‘only’, as in we’re ‘only’ 12 parsecs from these three maybe earth-like (or Venus-like, take your pick – what difference could it make?) planets.

12 parsecs is about 230 trillion miles. That’s about 40 light years. At a comfortable 1 G acceleration, it would take about 2 years to reach about 97% of the speed of light. Let’s just say you coasted at that point until you needed to flip your ship and do 1 G of deceleration for 2 years so that you don’t just go whipping past Peter Dinklage too fast to even get an autograph. So, yea, armchair physics says it’s not *impossible*.

That’s assuming 1. you solve the engineering problems involved in achieving and maintaining 1 G of acceleration for 4 years (2 starting and 2 stopping) and 2. don’t hit *anything*. A grain of sand, at 97% the speed of light, packs the punch of a freight train. Technically speaking.

So, say you hollow out an asteroid and put a boatload of fissionable material in it to power a couple big-ass (another technical term) nuclear reactors for a long time. You use the reactors to power drives of some sort that ionize asteroid rock and fling it out the back at very high speeds. And power life support for your crew, stuff like that.

With enough stuff, you could theoretically get your asteroid in gear to the tune of 1 G, not to be confused with the tunes of Kenny G, assuming that the mass of the reactors, fissionable materials and rock to be ionized don’t weigh so much that you can’t lift yourself by your bootstraps – can’t accelerate and decelerate all that stuff that much over 4 years given the efficiency of your engines. Also, let’s imagine some sort of shielding, something that keeps dust and dirt and anything larger from striking your ship. Magnetic? Automated lasers that reduce targets in the flight path to even smaller grains, grains it is fervently to be hoped are small enough that your ship could survive if it hit one?  Let’s just assume you solve that problem. With relativistic effects and a little luck, you might just make it there and back in your lifetime.

You’re ready to go – after all, you’re only 12 parsecs away! Just like I’m only about $100 billion from being the richest man in the world. Not to be a wet blanket, but 12 parsecs might as well be a million parsecs, given the current and short-term imagined state of technology.  But again, only 12 parsecs! A man’s got to dream!

3. Home Improvement Projects – of Doom! I have this pile of bricks, see. And a vivid imagination. On Craig’s list, it is easy to find yet more bricks for little or free. So, we need, as in clearly can’t survive without, a brick oven, a brick grill – and a brick walk up to the front door. Which would entail a brick ramp in lieu of hard-for-elderly-relatives-to-manage 2 steps. And a couple brick planters along the path for definition. And a little wall, same thing. Maybe some railings – they have these welding classes down at the Crucible. The front porch is ridiculously small, after the manner current in tract homes built in California 65 years ago – it could clearly be expanded to a more usable size…

No, there I draw the line – the porch project would probably require a permit in the eyes of the city, so it will have to wait a few years. However, these here bricks… I spend time at Mass meditating on the pleasing aesthetics of keystones in brick  arches, arranging imaginary fruit trees in our (really kinda tiny) front yard, placing imaginary half-wine barrel planters along an imaginary front walk. Web surfing keeps bringing me around to brick p@rn. Like this. Not that I mean to, it just that I’m a *little* *tiny* bit obsessive, sometimes.

The odd part is that I’ve had these bricks, maybe 15% of what the project would require, for years. Why now? Empty nest syndrome? Do it while my knees still work? In case you’re wondering, yes, I have done a couple brick projects over the years, nothing nearly this 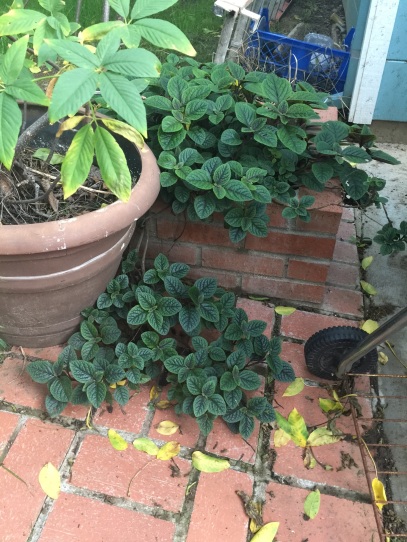 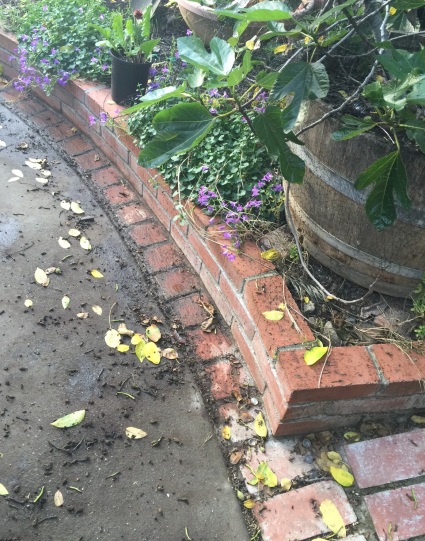 extensive, but the real deal. Even own a good trowel, and have used it enough to understand what makes a trowel good. I find these projects very satisfying, so much so that, like a mother (Mother’s Day tie-in! See?) forgetting the pain of childbirth, I have forgotten the sore back, sore knees and frustrations in light of the cool brickwork.

Perhaps I’ll finally hurt myself or otherwise become convinced that I’m too old for this sort of thing, and should focus on reading and writing. If not, hey, cool brickwork! And fresh wood fire pizza!