Musing on this most holy of days:

1. People like a tidy planet. People like critters and trees, free-flowing rivers and streams, dolphin-filled seas and clear, starlit skies. Right after we’ve taken care of feeding, clothing and housing ourselves and fending off barbarian murderers, we humans tend – all evidence points to this, just look around – to tidy up, set areas aside and otherwise keep the planet in a pleasing state. This is not speculation – Earth Day itself is a result of this basic desire for a nice place to live.

Even strip miners, lumberjacks and petroleum engineers generally want their little corner of the planet to be nice, and so can understand other’s desire for a nice place to live, too. Often – you’ll be flabbergasted to hear this – they can be reasoned with. We do ask them to balance the desires of urban-dwelling iPhone-using Prius-driving sophisticates for the raw materials and cheap energy that make their low-fat latte, light foam lifestyles possible with their desire for nothing bad to ever happen to anything in Nature.

Unless of course the Bad Thing is the Circle of Life manifesting itself as baby caribou paralyzed by terror being disemboweled alive by wolves – something like that, it’s not often clear. And policies that will condemn Africans, say, to death by malaria or permanent energy-starved poverty are OK to our current betters in the name of saving the planet.  So clarity isn’t a strong suit of Earth Day participants in general.

So let us remember the earth, this day, a tiny jewel in the firmament, as meaningless as the life of a single amoeba, as pointless as the rise and fall of the dinosaurs, as doomed as the red giant which will eventually consume it – except for the souls of the billions of people who have lived, do live, and will live upon it. Long may its beauty and utility reign!

2. The chief form celebrating Earth Day takes is having members of a hemp-vested priesthood lead the faithful in Lamentations, and to entreat their collective omphalos for progressively  more dire prophecies of the Apocalypse.  Here are the predictions made at the 1st Earth Day back in 1970, via the Oracle Wikipedia:

In accordance with this now-hoary tradition, we should expect sincere and possibly sweaty (1) panic mongers, knuckles white, to make any number of equally wrong and stupid predictions this year as well. Ice sheets melting, deserts spreading, sea levels rising, dogs and cats living together – that sort of thing.

The anti-Cassandra effect is in full force: these people will be believed no matter how wrong they have shown themselves to be in the past. No evidence to the contrary will ever sway those for whom the destruction of earth at human hands is their deepest religious belief, nor will any prediction of doom be judged too preposterous to promote as gospel.

3. Our youngest son is learning to play the violin. He recently got large enough to use a full-size violin. He is borrowing a violin I gave to his older sister back when she played. This violin I got from my father, who in turn got it from his father – the instrument is about 125 years old, a run of the mill fiddle made in France back when you could sell violins to lots of people.

When I had it worked on by John Jordan years ago, he told my daughter to never take it out of the country, because US Customs might not let her bring it back in. The tailpiece is made of tortoise shell – common enough a century ago, but trafficking in (possibly) protected species parts today. John had horror stories.

So now our diligent federal employees are protecting us and our French tortoise friends from the terror of little girls playing their great grandfather’s old violins. In the name of protecting the planet. Reminds me of the Gibson Guitars wood scandal of a few years back. Not that anything done to save Gaia from evil, evil humans could ever be motivated by anything other than unalloyed virtue…

4.  Just imagine how much more beautiful this scene was before a bunch of French villagers mucked it up with their quaint little farms and village: 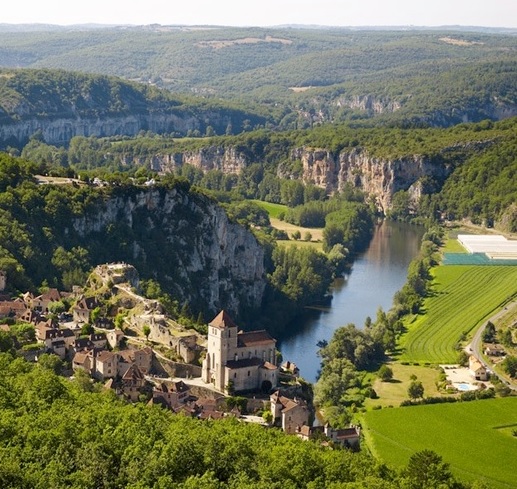 Or not. Maritain pointed out the beauty inherent in proper human activity – that, as beautiful as nature is in itself, adding beautiful works of man improves it. He used the example of a French farm – that French farmers took some care that their farms be beautiful. A natural scene was improved by adding an attractive French farm or village to it. (2)

To call nature “Unspoiled”, when that term is applied to part of the natural world merely lacking any evidence of the presence of humanity, is blasphemy.

We’re not “destroying the planet” when we turn it to our uses. Farms and cities and indeed all works that man makes in the course of being human are, in themselves, improvements and fulfillments of nature. Of course, we can do it badly, making ugly or ill-conceived things. But our very human drive as makers is part of our Nature, and part of our being the image of God, and thus exercising it glorifies and completes the natural world. This is what the natural world is for: to be the home to Man and our works. That is its purpose and glory .

3 thoughts on “Earth Day: A History of Violins”