As mentioned in the last post, my wife, youngest son and I drove down to Death Valley to check out the super bloom in progress. On the way back, we took CA 178 through the southern tip of the Sierra past Lake Isabella and down the Kern River canyon into Bakersfield.

First, the super bloom. Old timers say this year’s is not as good as the super blooms of ’05 and ’98 – whatever. Millions of wildflowers from dozens species covered many square miles of desert. The only real issues from the casual viewer’s perspective: since the bloom starts in the south and at lower elevations and moves north and higher over time, to get the full experience one would have to spend a week or two in the valley. Also, unless you’ve seen the moonscape that much of the valley is the rest of the time, you might not be too impressed by a bunch of flowers rather more thinly distributed than what one might see in spring in a typical temperate mountain meadow. 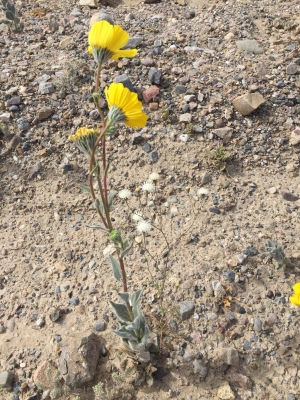 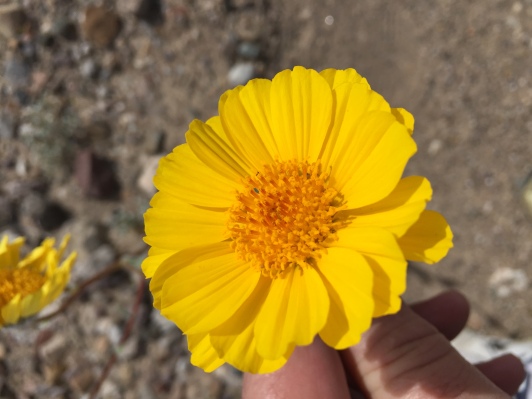 In another place: Here are pictures from a field of mostly sweet-smelling purple flowers that might be Purplestem Phacelia? 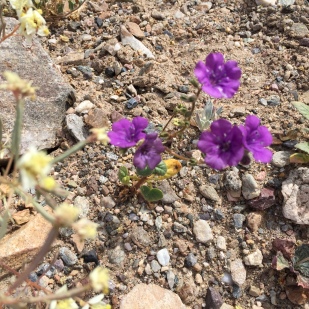 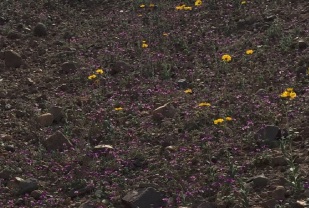 But since we’d been to the valley less than 2 years ago in August, when the temperatures top 120 F and the only plants to be seen in the bulk of the landscape are rather desperate, dingy and widely-spaces desert scrub, seeing those flowers was appropriately striking. As you can see in some of the picture above, a lot of the landscape is bare rock and gravel and looks not too different than the pictures sent back by the Mars rovers.

Once we got out of the car and looked down: 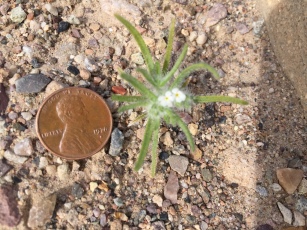 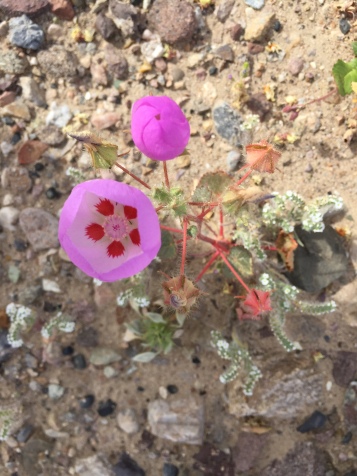 (Amateur hour at the botanist’s: Clockwise from the top, I think that’s a Notch-leaf Phacelia crenulata yet to bloom; the next 3 (with the penny) I have no idea, except that’s a tiny cactus to the left in the middle one; the only one I’m pretty sure of is the Desert fivespot in the lower right corner; the last grey-green thing with the yellow flower no idea.)

The bloom takes place in stages, with different flowers blooming at different times in different places. Some of those tiny plants will get big and bloom, conditions permitting. Some looked so perfect and complete even though tiny that I don’t know – maybe that’s a big as they get. You’d need to stay for a week or two to find out first hand.

The trip back along CA 178 was surprisingly spectacular. The first half climbs into the mountains through Joshua Tree and pine forests – usually one or the other, they don’t mingle much. Lake Isabella is about half way. The reservoir was very low after 4 years of low rainfall.

All that was pretty, but the windy mountain road following the Kern River into Bakersfield was amazing. This being the Sierra, the mountains on either side are granite, with the steep canyon slopes consisting of huge exposed rock interspersed with patches of grass, brush and occasional trees. The rains had turned the mountainsides brilliantly green. It looked for all the world like the Scottish highlands, only the mountains here top 5,000 feet or more, which I think is much higher than those in Scotland. You half expected Hobbits and Dwarves to trundle by on some high hidden trail.

Barring more rain, in a few weeks those canyon sides will return to brown. Like the super bloom, part of its glory is its quick passing.