Note: I’m reading and posting about Johann Gottlieb Fichte (1762 – 1814) because he is widely recognized as a key figure in modern education. He greatly influenced von Humboldt’s reforms of the German school system, which in turn greatly influenced Horace Mann and that crowd. It’s important, I think, in any discussion of modern education to recognize just what kind of a nut Fichte was. 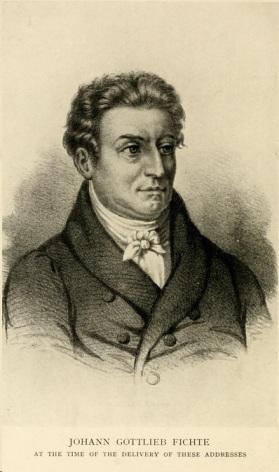 So, finished Addresses to the German Nation. Afterwards, reread the translators’ Introduction, by a R.F. Jones and a G.F. Turnbull, written around 1922, to get a feel for how his fans think of him.  Fascinating bits of gymnastics are involved in trying to credit Fichte with all sorts of good, forward-looking things while, at the same time, excusing him from all the obvious exaggeration and, frankly, lying he does, and, especially, from how a lot of his ideas played out from 1808 to 1922. But, here, let’s read a nice chunk. Messrs Jones and Tunrbull have just finished painting Fichte as a flawed saint – hard working and honest to a fault, beloved by his few close friends, admired by those who didn’t know him too well for his intellect and oratory powers, but pretty much universally despised by those he had to work with as an arrogant, self-righteous jerk. And then, there’s the slight issue of his fanatical nationalism wildly distorting his ideas:

Some of the ideas and opinions expressed in the Addresses are obviously false and cannot be accepted, while others are gross exaggerations and require considerable modification (?). Little comment need be made on Fichte’s conception of the German language as the sole living language(?!), or on his notion of the part that Germany has played and must still play in the process of the salvation of the world (!?!). His whole-hearted enthusiasm for things German inclines him at times to regard everything genuinely German as necessarily good, and everything foreign as necessarily bad. It is obvious what evil results would accrue from the logical development of such a conception (Note: said around 1922 – would the authors like a do-over on this statement in 1945?). He greatly exaggerates the part played by Luther and by Germany in the reformation of the Church ; and it may be that his forecast of some of the good results that would follow upon the adoption of his educational reforms is fantastic and overdrawn (Really? Ya think?). The fact, however, remains that these false and exaggerated ideas are but small blemishes in the work (See my comment below); they are easily explained, if not justified, when we consider the desperate state of the times, the exalted aim of the lecturer, the peculiar difficulty of his task, and his enthusiastic personality. In any case they do not affect to any considerable extent the tremendous influence of the Addresses at the time, and their great importance for the understanding of subsequent periods.

So, we’re to ignore the difficult (*cough* NAZI! *cough*) aspects of Fichte’s ideas because he meant well and had his country overrun by Frenchmen? We are to credit him with undefined good results that haven’t actually happened, while giving him a pass on the crazy and dangerous aspects of his theories? John C. Wright, with his typical manly vigor, often calls attention to this odd habit of the Left of wanting credit for good intentions while simultaneously downplaying any actual bad stuff their heroes did (see this essay, via Darwin Catholic, for a risibly clear example of this phenomenon.) Be that as it may, such is certainly in play here. Fichte, alleged paladin of TRVTH, just makes sh*t up when it suits him, and gets a pass.

(Ahhh! Freakin’ WordPress just ate the second half of this essay! ratzin’fratzin….)

So, what is Fichte’s appeal? First off, he offers a sort of secular salvation history. (God makes an appearance, occasionally, but Fichte’s God is odd enough that accusations of atheism dogged him (Fichte, not God) his entire professional life.) Man, as most perfectly expressed in ‘the German’, has been slowly progressing from stage to stage, until now, in the fullness of time, it is the German’s job to make, like eeevolution in the X-Men, a leap forward.  It has fallen to Fichte to explain exactly how that is to happen – the ‘State and its advisers’ are to seize control of the nation’s children, take them away from their parents for years on end, and raise them up to be perfect little Germans, which, it goes without saying except that he says it numerous times, are perfect little people. All will be sweetness and light, when the properly educated German is moved by nothing but completely selfless love of the Fatherland.

What’s not to like? Clearly, German moms and dads have screwed up their kids – otherwise, the Prussian army would never have lost to the French. (No, really – that’s what the argument boils down to.) Second, Fichte makes fun of the French and assigns every positive human development forever to the Germans. Sounds great, if you’re German. (Seriously, he claims to have character and to be German are the same thing. Among other things.) Finally, he provides an outlet for German humiliation and frustration by focusing on doing something their French conquerors will allow them to do: educate their children.

Fichte is what happens when very smart people are fed on Rousseau and Locke and untethered from the Perennial Philosophy. Sure hope this whole salvation through statism thing doesn’t catch on….