With the family in SoCal, attended Mass at a nice little church right on the beach. Before we get to the music, must mention that the Crescat’s head would explode if she ever attended mass at a SoCal beach community Catholic church – while, it being November and all, I didn’t see anyone showing a little navel for the Lord this time, did catch plenty of bare backs, leggings and short outfits, and a few of the ubiquitous dudes in jams, t-shirts flip flops. I’m a local – these are my people. I’m of the ‘hey, at least they are at Mass’ crowd – instead, I whine about the music, which means I’m not of the ‘hey, at least they’re fidgeting while the wanna-be rock band in the sanctuary plays ditties that aspires to sound like what Joni Mitchell might write if she were 1/10th as talented and a lapsed member of the Church of Christ’ crowd. Or something.

On the plus side: the choir performed in the choir loft – one can only imagine the paperwork required to get the 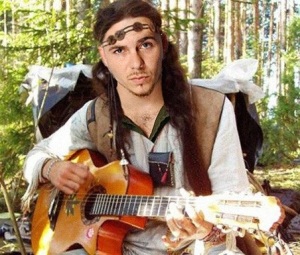 special papal dispensation from the iron-fisted LAW of the Spirit of Vatican II recorded nowhere that REQUIRES poor musicians to perform bad music no one can or is willing to sing from right there in the sanctuary, where our BFF Jesus intended. But they did it! Huzzah! Also, the piano player had a very good gospel touch, and the singers could actually sing. And, really, the music wasn’t as bad as all that – I was just on a good roll, there, and kinda vented.

People at the church were very nice. The homily was good, and the Sacrament efficacious as always.

Now for the ditties: we started with vague, infantile lyrics wedded to a preschool-level tune: the execrable Song of the Body of Christ. Well, then, now that we’ve got *that* song, why sing anything else? I mean, what else is there?  Or maybe he didn’t mean *the* song of the Body of Christ – perhaps he really just meant *a* song, allowing for some other ditties to be sung? Because who could be that hubris-drenched and unconscious? So Mr. Hass committed to paper the following:

Refrain
We come to share our story,
we come to break the bread,
we come to know our rising
from the dead.

3. Bread of life and cup of promise,
in this meal we all are one.
In our dying and our rising,
may your kingdom come.

4. You will lead and we shall follow,
you will be the breath of life;
living water,
we are thirsting for your light.

Word-count analysis: God, Jesus, the Holy Spirit are mentioned by name exactly 0 times; pronouns for the Divinity To Be Named Later: 6. ‘We’, ‘our’ and other references to our wonderful little selves: 16. We have been mentioned 6 times before God is alluded to once. So, who is this song about? Who is it praising?

But that’s small potatoes. It’s what we’re saying about ourselves that would be heretical if it were coherent enough to clearly mean anything:

This is a reference to Scripture & Tradition, I imagine? While it is indeed our story, might it be healthier for our souls to acknowledge that the Actor in our story is God? At some point?

we come to break the bread,

Of course, this is very Scriptural – but so is that whole ‘Body and Blood of Christ’ thing we Catholics like to go on about. Sticking to less than half the story ends up telling another story altogether – and that would not be the story that we share.

we come to know our rising from the dead.

‘Know’ ‘our’ rising from the dead? That word – I don’t think it means what you think it means. Not sure what the author is trying to say here. In more primitive yet clearheaded times, we might first have made some mention of Christ’s death and Resurrection, and how he deigned to save us by them, and how we are blessed to share in them – you know, so that our prayer in the form of song might attempt to express the fullness of the mystery rather than leave a gaping whole that suggests an outsized roll for ourselves in our own salvation.

And it’s down hill from there. The chief characteristic – it’s the musical equivalent of the campaign slogan ‘Hope & Change’ – a content-free canvas upon which you are free to write whatever you want.

Next, we had Shelter Me O God, a somewhat better tune with comparatively sophisticated lyrics (because they are based on actual Scriptures). Still, not my cup of tea – it’s good to remember that every time a song like this is sung, a much better song is not being sung.

Though I walk in darkness, through the needle’s eye of death, you will never leave my side.

“Through the needle’s eye of death” – um, what? Unless I missed something, it’s more like ‘the valley of the shadow of death’ and ‘camel through a needle’s eye’ – Is this a subtle hint that Bob Hurd got rich and is now worried about his salvation? that his personal dark valley involves passing through a needle’s eye? I mean, is there serious money in writing songs like this? maybe I should reconsider my career choice…

We did the old chestnut How Great Thou Art, a perfectly OK song, I suppose, except very odd for a communion song, as it’s not exactly on topic. Also, we did it in a swingin’ 3 – did I mention the piano player really liked to work the Gospel angle? That this is not remotely in a Gospel style didn’t slow him down.  Plus, the change only meant anything to people who could read music and who were actually singing – a tiny minority.

Finished up with We Are Called. I’d like to like this song more, as it mentions God – by name, even! – and speaks of humility, which is not a popular concept in these sorts of songs. But, ultimately, it’s just another lame pop song that no one would ever voluntarily listen to outside of a church setting. Try to imagine some kid flipping channels on the radio, and coming across this song, and not changing the channel as fast as possible.

UPDATE: We went to mass again this morning (we’re impetuous that way) and the priest picked a couple old warhorses to sing – and under 10% as many people as were at the Sunday mass out-sang that them. If we are taking the dubious position that singing = participation, then there was far more participation measured by volume from a couple dozen mostly elderly people singing ‘Holy God We Praise Thy Name’ than all the goofy modern songs on Sunday put together – a capella at 8:00 in the morning. This is why I stopped doing ‘folk’ masses 25 years ago: the discrepancy between theory (the kids like this stuff! it’ll drag ’em in and help keep them there!) and reality (no sane kid would voluntarily ever listen to this stuff,let alone sing it, while any of a number of good, solid, easy and orthodox hymns will have the house rockin’!).

UPDATE II: this morning, we lead off with a Carey Landry number – always an adventure in not sticking pointy things violently into my ears – and Surprise! – people barely sang it. (I went ahead and sang it at a decent volume, as I face millennia in Purgatory, if I’m lucky). Hmmm – could their lack of enthusiasm be a sort of vote of no confidence? At the end, we sang Faith of Our Fathers – and, again, we could have drowned out the Sunday choir and congregation, even though we were singing unaccompanied in a too low key.